As we approach the end of the year, how is your 2016 52-week challenge?  Is it going well?Are you on-track?  Are you off-track?  What will you do differently for next year’s saving challenge?

As early as now, I want to share with you the 2017 52-week challenge template as I anticipate things will be very hectic for me for the rest of the year. 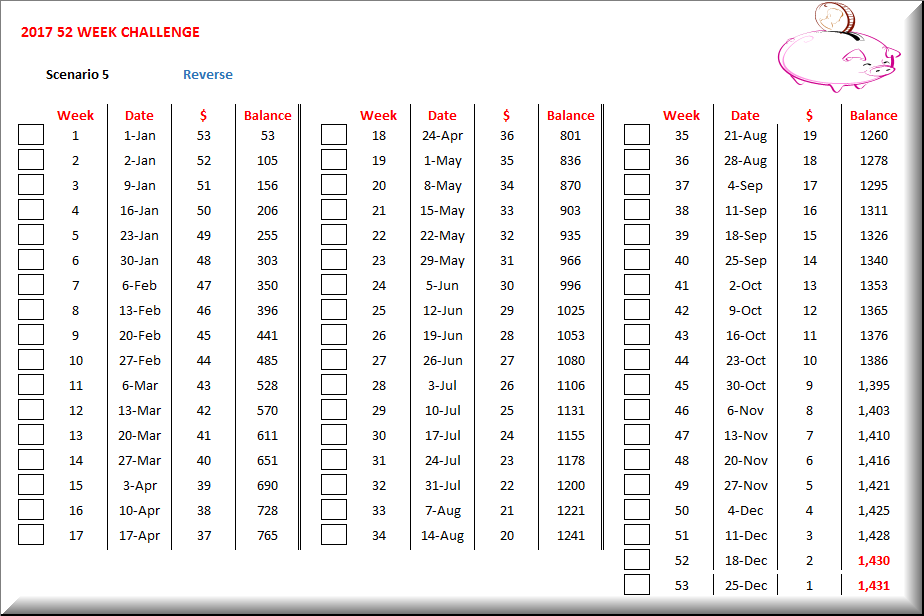 Scenario 1 is the original 52-week challenge starting from $1 on wk1 to $53 on wk53.  This works with SGD because at the end of the horizon you will have 1,431SGD or roughly 48k Php, depending on the exchange rate.

Scenario 2 contains a multiplier.  Just input the amount you want to be the multiplier and it will auto compute.  If I use 10 as a multiplier, wk1 will be 10Php  and wk53 will be 530Php.  It makes more sense to use this for Philippine pesos because by the end of 2017 you will have around 14k Php in savings.

Scenario 5 contains the 52-week in descending order or reverse order (as shown above) where you will start on wk1 with 53$ and ending wk53 with 1$.  This may provide a good motivation for the newbie saver to save consistently and build the discipline of saving.

Play around with the template until you find the scenario that works for you.

In 2015 and 2016, I used Scenario 2 of having a multiplier.  Since I was saving in SG Dollar, I used 2 as the multiplier.  Starting 3rd quarter of the year, the weekly amount became challenging given the big amount (averaging around 80$ per week).

Download the template by clicking the link: 2017 52-week challenge template